Call of the wild: planned Dartmoor crackdown ‘will penalise campers’

Shamus McCaffery, 53, who lives in the heart of Dartmoor and wild camps there three or four times a month, is among many who are worried about an imminent threat to their freedoms.

Dartmoor National Park Authority (DNPA) has launched a consultation on new bylaws that could reduce the areas where people can legally wild camp in England and Wales by 2,400 hectares, as well as ban activities involving more than 50 people without the agreement of landowners. People caught by the moor’s rangers camping in the wrong spot or gathering in large groups without permission could be fined £500. “Our hard-won freedoms to spend nights on the moor surrounded by nature are at risk,” said McCaffery. “This will criminalise law-abiding users of the countryside.”

Veteran Dartmoor campaigner John Bainbridge, who led successful protests against quarrying in Shaugh Moor and Blackabrook Valley between 1996 and 2001, said the plans went against the intention of the postwar Labour government to create national parks where the public could enjoy outdoor recreation. “Our national parks were created for the benefit of the public after the Kinder Scout mass trespass in the 1930s. They were not intended to be ruled over by control-freak park authorities,” he said. “At a time when more and more people are seeking to explore the outdoors, Dartmoor’s Park authorities are actually making it more difficult.” 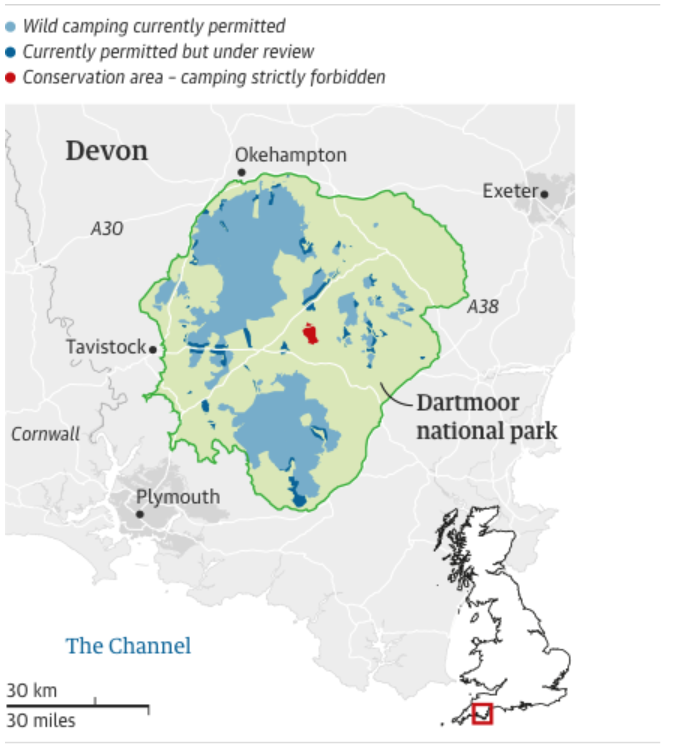 Dartmoor is the only place in England and Wales where people have a right to wild camp. In Scotland and much of Scandinavia people are free to camp on open land providing they leave no trace.

The DNPA, which is made up of members appointed by councils and the government, argues the park’s bylaws need to be updated because of an increase in large groups camping beside roads, lighting fires and leaving behind piles of rubbish during the pandemic. Rangers recorded 199 so-called “fly-camping” incidents, including overnight stays in camper vans, in 2020. So far this year there have been 70 similar incidents. The proposed changes would also allow the authority to ban camping in other parts of the moor without a full consultation.

Bainbridge, who is a former chief executive of the Dartmoor Preservation Association, said thousands of responsible campers were being punished for the actions of a minority, who already flout existing laws prohibiting littering and roadside camping. “There are several thousand people who wild camp properly on Dartmoor. They don’t leave a mess and don’t destroy things. They are the ones who are going to be punished. The so-called fly campers of last year and this year won’t bother with the new bylaws – they will just carry on, if they ever return.”

McCaffery, who worked as a search and rescue specialist for 20 years, said many of the areas covered by the proposed ban were easy to access and used by less experienced campers, families and disabled people. “Now is not the time to reduce access. Now is the time to open up the countryside and provide for the nation. That’s the whole point of national parks.”

He knows of a woman who camps on the moor with her son 100 metres from the nearest road so she can get to her car in an emergency. McCaffery added: “This is going to impact on those less able to get deeper on to the moor.”

The proposals state that no person shall engage in any activity involving more than 50 people unless they are “authorised to do so in pursuance of an agreement with the owner of the land and the authority”. Campaigners fear this new bylaw gives the 15 landowners who own nearly half of Dartmoor – including the Prince of Wales, family-owned estates and companies registered overseas – a potential veto over larger events. “We saved two parts of Dartmoor from the quarrying industry by organising protest walks,” said Bainbridge. “But under these new bylaws if more than 50 people turn up you’ll need the landowner’s consent, which they are hardly likely to give if you are protesting against them.”

DNPA said it was seeking to protect areas struggling with overuse and prevent organised events adversely affecting the moor’s environment. “The bylaw review does not seek to curb public access, nor anyone’s right to public access; it seeks to protect the national park by updating and amending the bylaws to make the rules clearer, deal with long-running issues and help staff enforce them – something they cannot currently do even in places where problems exist,” said a spokesperson. It is essential that event organisers work with, and seek permission, from landowners and us so events are safe, manageable and don’t adversely impact on protected sites or wildlife.”

The newest member of. the team to join in September 2021, Kayleigh joined the team to grow our news section and to keep you up to date with more of the info you need to know. As a contributor to Camping Sites in Britain, Kayleigh covers news and trending technology related stories. If she isn’t writing for us she can often be found camping usually in the Lake District. 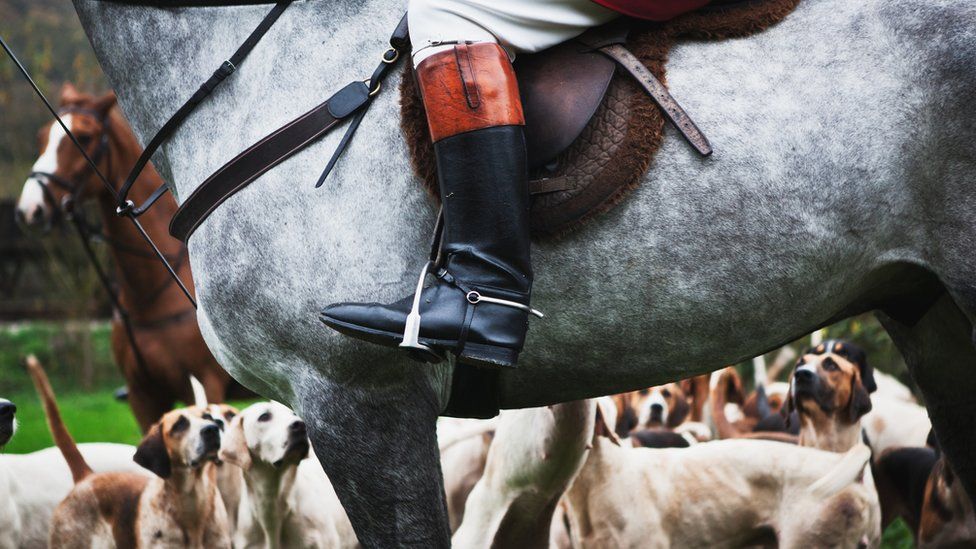 National Trust members have voted to ban trail hunting on its land amid fears it is being used as a “smokescreen” for illegal foxhunts. The … 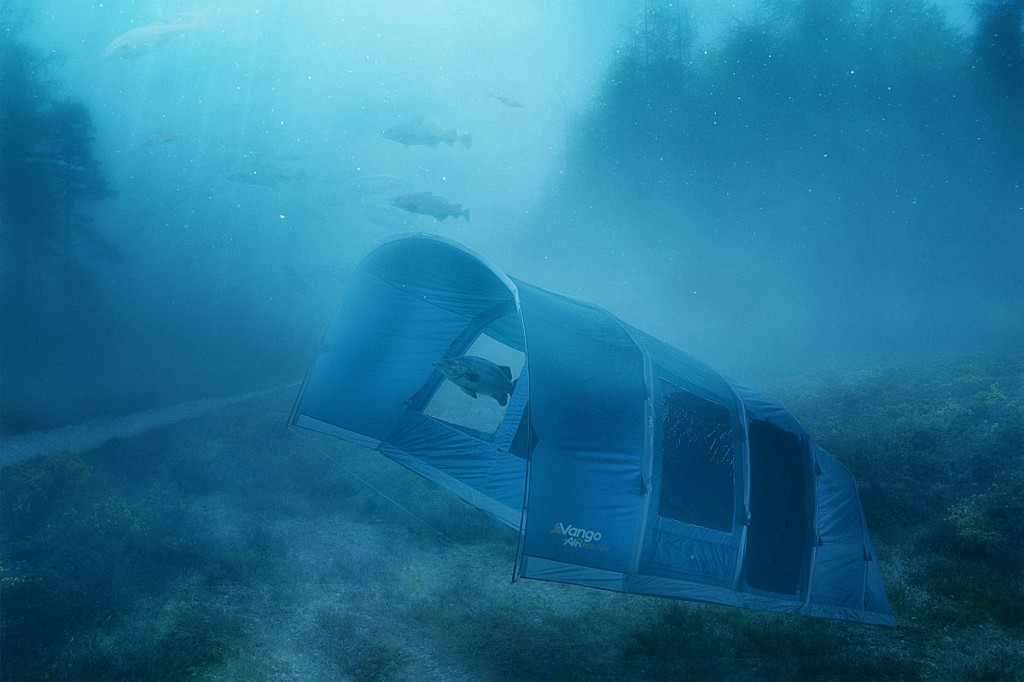 Some of Scotland’s best coastal wild camping areas could disappear because of increased coastal erosion, research suggests. Climate change has increased the effects of wave … ‘Nowhere to hide’: Campers share their most embarrassing stories – ‘rolled down the hill’

CAMPING has never been more popular, but the holiday option can be fraught with embarrassment and mishaps. Many Britons are keen campers. However, a camping holiday …